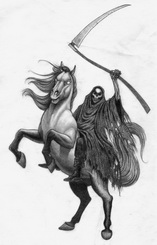 A Plague on All Our Houses!

Neely Bruce has seen the future, and it sucks!

After my mind-bending experience of producing the pre-recorded tape for Henri Pousseur’s Tales and Songs from the Bible of Hell, my time and attention—indeed, my entire life!—was increasingly devoted to Electric Phoenix.  The lecture I had recorded by William Burroughs in 1980 on The Four Horsemen of the Apocalypse, which he gave at the Institute of Ecotechnics Planet Earth Conference in Aix-en-Provence and which I sent for broadcast to KPFA, inspired us to invite four American composers to come up with a quartet of works based on this biblical source.

The irrepressible Neely Bruce of Wesleyan College, Connecticut,  immediately latched onto the Fourth Horseman, representing death by pestilence. Little did we know that he would stretch our technological and biological limits virtually to destruction.  He arrived in London with the score of The Plague, a three-quarter-hour extravaganza based loosely on the tales of Boccaccio. It required an elaborate pre-recorded tape which we produced somehow in my tiny studio, using the four singers, with Linda Hirst doubling on flute and Daryl Runswick on the electric bass, with which he had made one of his several reputations. Neely and Daryl played the electric keyboards; Daryl rounded up two legendary rock musicians, Ray Russell, rhythm guitar and John Marshall, drums.

There was no time to write out complete scores, and so the instrumentalists performed like improvisatory baroque musicians from what was not much more than a figured bass. Most of the parts were recorded on single takes, with only one break point possible in the Herculean ordeal. With only eight tracks available on my studio TEAC, there had to be submixes, with their internal balance gauged against the parts that would be added later.

As the first performance in America grew nearer, the working days got longer. We were kept going by the conviction that it would be a remarkable piece, but also by the innocent enthusiasm that never deserted Neely’s cheerful face. Oblivious to human limitation, he kept thinking of improvements, each of which would only take an extra hour or so to accomplish.

The punishing schedule took its toll. Before or after the first performance, one by one we all came down with a debilitating illness. I held out until after, and then spent two days recuperating in the university infirmary with something indefinable but disabling. Was it all worth it? Speaking for myself, I still think of us as war buddies—survivors of a campaign in which the end product was not the slaughter of an enemy, but the unlikely creation of a magical experience. Neely’s premonition of biological disaster becomes more relevant with every passing day.

My most vivid impression of Neely is of a jolly Jeremiah who saw the world collapsing about his ears and devoted his enormous talents of genre and collage to propping it up a little longer. My memories of the endless hours of recording The Plague, and then my hours alone mixing and remixing, are like recollections of trench warfare, except that the final product was an amazing creation rather than a wanton destruction. I've just been listening to it yet again and find it more grippingly contemporary than when we recorded it a quarter of a century ago.

To listen to The Plague, pause the clip (above) and click HERE.